At the largest scale, it is possible to create an entire site dynamically based on a trigger from a record update.

This would be used in a similar situation to creating a list or library dynamically.

Consider this action when trying to create distinctly different work areas for users that can be managed independently.

Note: This video shows creating Actions with an older version of Ultimate Forms. The process remains the same, but the way you access Ultimate Forms has changed a little.

If you’re in the SharePoint Modern experience, the link for Ultimate Forms will be on the menu bar of your list or library (if it’s not visible, you can also get to Ultimate Forms via the site contents).

The Ultimate Forms home page has a new and improved look.

Verify you’re working in the list or library you want.

To open the Actions feature, click the Actions link in the Business Logic section of the menu. Once you’re in the tool, the process is the same as shown in the video.

In Office 365 actions are hidden from the users by default. In this case, simply leave "Manual execution" unselected. Also the "Column Name" selection is not present in Office 365. The interface looks slightly different as shown: 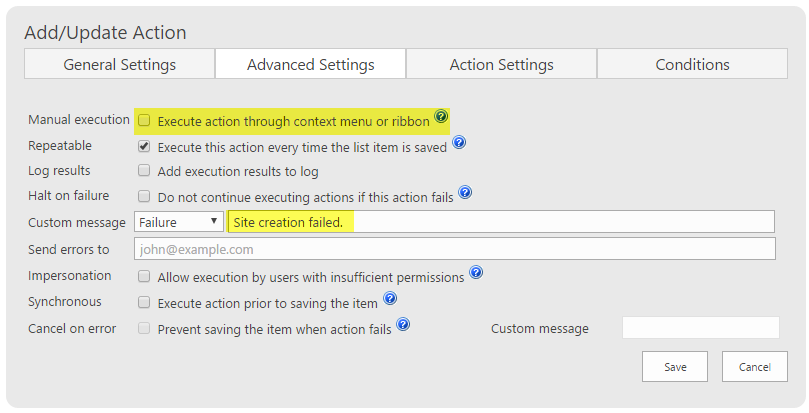 At a fundamental level, sites are a simple means to organize content in a heirarchical manner. This is in many ways similar to create sub folders or subsites on an internet site or intranet site. Individual sites can be managed independently from each other and it is easier to manage user permissions at a site level rather than being forced to use more granular permissions at a library level or item level.

Comments are not designed to replace support calls. If you have a specific issue with one of our products, please send an email to support@infowisesolutions.com to open a support ticket.
Reply to: from

Success! You will be contacted shortly by one of our representatives.
Submission failed, please try again or contact us by email: sales@infowisesolutions.com
Request a Live Demo

Book an appointment for a one-on-one with an ULTIMATEforms expert trainer.

Have a strong start

Only thirty minutes of well-coached time can translate into great future savings in time and money. So, sit back and enjoy the ride.

Learn how to address business process pain points immediately. Save time and money.

Success! A demo request was created and a confirmation email will be sent to .
Please contact us if you wish to re-schedule or cancel the demo.
There was an error processing your request. Please contact us for further details.
Technical details: